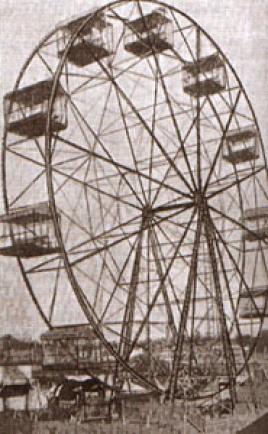 The world’s largest Ferris wheel, which stood over 100 feet high, could carry 100 persons at one time. Gravity roads (roller coasters) were scattered in four different areas in the park. The Shoot-the-Chute featured boats carrying twelve passengers down a greased chute, landing in a lake with a tremendous splash and shrieks of laughter. (Shades of “Great Adventure” a century ago!)

Thompson built a special 1800 – foot pier into the Delaware Rover to accommodate the thousands who poured into Washington Park from Philadelphia and eastern Pennsylvania. The end of the pier was such a distance from the center of the park that he built an aerial gravity road and trolley line from the park to the end of the pier to facilitate transportation.

The hub of the park was the old Howell Mansion, the residence of the Howell family of Fancy Hill for many years. The mansion contained a cafe and restaurant. The second-floor dining room overlooked the two-story band pavilion which seated approximately 1,000 persons.

The park was handsomely landscaped and the mid-way, which was made of cobblestones, was replete with amusements of every kind. Balloon ascensions, firework displays, and bicycle races were special attractions for the farmers’ annual picnics and the several merry-go-rounds in the park were always enjoyed by young and old alike.